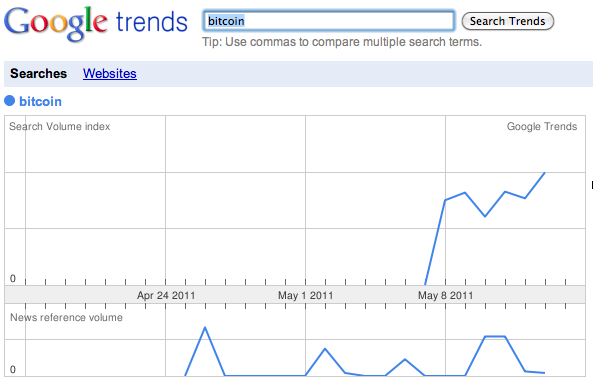 Solid discussions of this piece on BoingBoing.net, Hacker News, Slashdot and Reddit. Rob Tercek has a follow up to this piece here.

by Jason Calacanis and the LAUNCH team

A month ago I heard folks talking online about a virtual currency called bitcoin that is untraceable and un-hackable. Folks were using it to buy and sell drugs online, support content they liked and worst of all — gasp! — play poker.

Bitcoin is a P2P currency that could topple governments, destabilize economies and create uncontrollable global bazaars for contraband.

I sent the 30 or so producers of my show This Week in Startups out to research the top players, and we did a show on Bitcoin on May 10. Since that time the number of bitcoin stories has surged.

After month of research and discovery, we’ve learned the following:

What Are Bitcoins?
Bitcoins are virtual coins in the form of a file that is stored on your device. These coins can be sent to and from users three ways:

1. Direct with peer-to-peer software downloaded at bitcoin.org
2. Via an escrow service like ClearCoin
3. Via a bitcoin currency exchange

Each owner transfers the coin to the next by digitally signing a hash of the previous transaction and the public key of the next owner and adding these to the end of the coin. A payee can verify the signatures to verify the chain of ownership.

You can watch a simple video here: http://jc.is/jlcte0

Where Do Bitcoins Come From?
Bitcoins are created by a complex algorithm. Only 21M can be made by the year 2140. Your desktop bitcoin software can make bitcoins, but at this point the electricity and time it would take to produce a bitcoin is larger than the actual value of a bitcoin (your laptop might take five years to make one, and they currently trade at $6.70 per bitcoin [ see https://mtgox.com/trade/buy for the latest exchange rate ].

Bitcoin miners use super cheap GPUs (not CPUs) to create the coins, but as more people come online to make them, the algorithm adjusts so that one block can only be made every 10 minutes.

Who Invented Bitcoins?
An individual with the name — or perhaps handle — of Satoshi Nakamoto first wrote about bitcoins in a paper called Bitcoin: A Peer-to-Peer Electronic Cash System. This person has stepped back from the project and trusted Gavin Andresen to take charge as the project’s technical lead.

How Does One Buy and Sell Bitcoin?
Currently Paypal and credit card companies are making it illegal to sell bitcoins. Why? Simple: PayPal’s terms of service prohibit “currency exchange.”

Given that you can’t whip out your Paypal account and buy them, and that it will become harder and harder to get them, bitcoins will be bartered for services in the real world.

For example, a Hacker News community member named Nicholas Carlson just boasted that he is being paid for a programming project in bitcoins.

Bitcoins in Real Life
In the next year you’ll hear about people in casinos in Vegas buying and sell bitcoins for cash and casino chips.

Imagine a bachelor party comes to Vegas and STNY (someone that’s not you) gives $550 to a guy at a bar and he takes out his laptop or tablet and ships 100 bitcoins to STNY’s phone. STNY then goes to Craigslist and ships some bitcoins to an escort and a drug dealer, who then show up in person to provide goods and services.

The Drug Underground and Bitcoin
Last month folks were buzzing about an online drug marketplace called SilkRoadMarket, which was reportedly trading in, well, all kinds of drugs: marijuana, mushrooms, LSD, ecstasy and DMT.

Of course, since bitcoin transactions are untraceable, you would have zero recourse if you sent a dozen bitcoins to someone for a couple of tabs of LSD. Just like you might lose your $10 if you gave it to a kid in the school yard for a dime bag and he never came back.

Let’s Make Some Predictions
We are 100% certain that governments will start banning bitcoins in the next 12 to 18 months. Additionally, we’re certain bitcoins will soar in value and a crush of folks will flood the system and start using them.

Currently there are 6M coins at $6.70 each for a total economy of about $40M. Bitcoin speculation and hoarding will also cause a massive spike in bitcoin value. For example, if 10M people find out about bitcoins in the next year and want to buy $100 worth, $1B will be infused into the bitcoin economy.

Finally, there will be massive breakage in bitcoins. If your laptop crashes and you didn’t back up your bitcoins, well, you’re SOL. If someone steals you laptop that has 10,000 bitcoins on it you won on Bitcoin Poker, you’re SOL. Lost your USB drive with 500 bitcoins on it after a night out on the town? You’re SOL.

Sites like 99designs, eLance and oDesk will start accepting bitcoins for payment. If they don’t, they will face competition from folks who do.

Bottom line: The world is going to be turned over by bitcoins unless governments step in and ban them by prosecuting individuals.

This is about to get really interesting, everyone.

* We made this term up to describe the “good people” of the internet who believe in the fundamental rights of individuals to be free, have free speech, fight hypocrisy and stand behind logic, technology and science over religion, political structure and tradition. These are the people who build and support things like Wikileaks, Anonymous, Linux and Wikipedia. They think that people can, and should, govern themselves. They are against external forms of control such as DRM, laws that are bought and sold by lobbyists, and religions like Scientology. They include splinter groups that enforce these ideals in the form of hacktivism, such as the takedown of the Sony Playstation Network after Sony tried to prosecute a hacker for unlocking its console.

Who is Satoshi, the mysterious bitcoin founder? clip

The million-dollar bitcoin question: Can the system be hacked? clip

LAUNCH Coda
#61: Money changes everything if you let it.